Brain Drain from Scotland to London: Working in the City by hook or by crook?

This is re-post from the Arc of Prosperity blog in its entirety.  Good exploration into brain drain to London from Scotland.  There has also been much discourse lately concerning the cost of living in Scotland, and the difficulties faced by start-up entrepreneurs there, in a zone with a relatively low concentration of early stage entrepreneurial risk capital. Many are yearning to return to Scotland because of this fact.

Forced opportunities to work in London 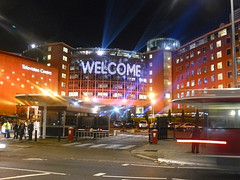 Better Together campaigners love to wax lyrically about the opportunities that are available to Scots as a result of the Union. For instance, here’sRuth Davidson: “Why shouldn’t thousands of Scots seize opportunities to work in London, one of the world’s great cities? […] Young people in Scotland want to make it in life – they see the opportunities their parents had, and they want those opportunities too, and more besides.”They forget that London is a global city (37% of the population were born outside the UK), so it would be rather strange if London suddenly refused to accept people from Scotland after independence.

They also forget that for many people moving to London isn’t a choice, it’s a necessity. There simply aren’t enough opportunities in Scotland.

Iain Macwhirter provided a good example in a very interesting article in The Herald today:

Scotland has had no shortage of broadcasting talent, but it largely gets exported to London, which is why Scottish accents are so prevalent in the media village. Anyone who wants to get on in the BBC has to go to London — as I did — because that is where the jobs are, where the careers and the budgets are. I spent more than 20 years in the BBC, nearly half of it in London, and it seems to me that the present situation is the worst of all possible worlds.

In the BBC “family” Scotland is always the poor relation, and required to know its place. BBC Scotland is run by a defensive clique of managerial trusties whose main job seems to be holding the line against the Nationalist menace. […]

Many Scots do try to come back from London, of course, but it is a big risk. I was speaking recently to one of my contemporaries, who started in the BBC when I did and became one of the best documentary film makers in Britain, with a string of Baftas and other awards to her name. She tried to come back to Scotland three years ago, and found she simply could not get any commissions from the BBC. So she had to go back to London. If you are not in the metropolitan village you are little people.

I definitely think it’s good for many young people to travel and see the world, but if the only job openings within a given field are in London, they can hardly be described as opportunities any more.

Danes would never put up with a situation where many careers forced people to move to Stockholm, Berlin or London. Why should Scots?

I want my kids to have the opportunity to have rewarding careers in Scotland if they so desire, and ideally also to be given a chance to work anywhere in the world if that’s what they want to do. However, I don’t want them to be forced to moved to London.

We need independence to create the careers at home that people need. Creating more opportunities here doesn’t mean that the jobs abroad suddenly disappear. On the contrary, they go from being forced choices to being genuine opportunities.”

This entry was posted on September 2, 2014, 12:29 and is filed under Scotland as a Spinout. You can follow any responses to this entry through RSS 2.0. You can leave a response, or trackback from your own site.