Academic Entrepreneurship in the Hospitality Industry 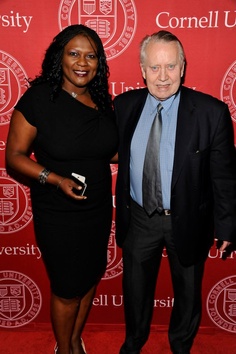 Our all-time favorite academic entrepreneur of course is none other than Chuck Feeney, Cornell University Hotel School ’56, who founded a dorm room startup selling sandwiches to his fellow students as an undergraduate. Later, he would go on to found and grow other very successful companies, such as Duty Free Shoppes, General Atlantic Partners, and a host of others while becoming one of the world’s most influential modern philanthropist who recently “came of out of the closet” and signed copies of his autobiography The Billionaire Who Wasn’t: How Chuck Feeney Made and Gave Away a Fortune Without Anyone Knowing, Chuck has given over $1 billion to Irish Education and at least $350 million to causes in Vietnam, especially those helping orphans. His foundation The Atlantic Philanthropies has a mandate to give away all of its funds and shut itself down within a 15 year lifespan and was behind the $350 million gift to Cornell University’s NYC Tech in New York City in order to expand the level of  technology academic entrepreneurship from the university and the City itself.  As a Hotelie, he has of course also started and ran a hotel company, Asia Pacific Hotels.

Thus I write as I was fascinated to learn about a recent “academic entrepreneurship” endeavor in the hospitality industry with an Asian connection. Graduate Hotels, was covered by the Wall Street Journal yesterday  in an article entitled “Hotel Chain Gives it the Old College Try”.  This appealed to Hotelie spirit in me and thus I share.  Perhaps a bit of yearning to return to the good ole’ fraternity days on the Hill as well is in the subconscious.

The story also appealed to the entrepreneur as well, for it’s a classic David vs. Goliath story, as Graduate Hotels will go up against the giants in the industry such as Hilton and Marriott.  This is a capital-intensive battle with a bit of intellectual property thrown in the middle of it. It is also a battle brands, and is exemplary of the marketing strategy issues confronting the industry today. Most impressively, Graduate Hotels is teaming up with the hottest boutique hotel affiliation brand at the present time, Small Luxury Hotels of the World for what should be a real win-win partnership.

There is also a whole challenge with academia, including the use and leveraging of university brands, as well as the potential for some really interesting partnerships.  In this play there is also real market validation of the importance that universities play in the economic development of their regions as well.

Another sub-theme here is the continued migration of capital from China to the Western states. This time its Cantonese, but Mandarin is not far behind it as discussed in other writings of the AE.

Gaw Capital Partners from Hong Kong is partnering with AJ Capital Partners of Chicago to invest $500 million to open 20 new hotels in different university and college markets across the USA.  A brilliant startup and the AE has long talked about such an opportunity in college towns around the globe.

According to the WSJ  on the design of the hotels:

These hotels won’t resemble beer-soaked fraternity houses or impersonal dormitories. Instead, each property will have a bar and restaurant, locally inspired art collections and 100 to 150 rooms with handcrafted items and rates slightly above the area’s limited-service hotels.

and on the planned locations of the hotels:

“These towns are seeing a renaissance,” said Christian Strobel, Graduate’s president who was previously an executive with boutique hotel operator Joie de Vivre. “They are often state capitals or cultural hubs for a state, and they attract entrepreneurial companies by offering an alternative to big cities.”

and on the fun that could ensue in the ambiance of this new chain:

“The Tempe hotel, also opening in October, will feature an ant farm behind the front desk, a nod to Arizona State’s popular social insects department.”

This market opportunity has existed for hundreds of years, and its surprising that so few hoteliers have found it and exploited it. This is a lesson in the viability of entrepreneurial ventures through innovation in design and branding in mature industries; even those that are not growing very much at all. Incumbents can always be unseated. Go to it, entrepreneurs!

This entry was posted on August 27, 2014, 15:29 and is filed under China, Cornell University, Dorm Room Startup, Hotel and Hospitality Schools, Hotel Industry, Hotels, Uncategorized. You can follow any responses to this entry through RSS 2.0. You can leave a response, or trackback from your own site.