The Academic Entrepreneur recently took a trip to the Republic of Macedonia to teach MBA students e-commerce and internet startup strategy during an intensive two-week pre-semester course. This followed a conference and similar opportunity of education in Turkey. The plane flight was enjoyable and short, and the mystery of Macedonia intriguing.

The Academic Entrepreneur got off the plane in Skopje, the capital city of Macedonia with roughly the same population of Edinburgh and was immediately struck by the large sign he saw in the baggage area. Although he didn’t get a photograph of it at the time, it read (more or less, as best as he can recall from memory):

A Great Place to Start or Relocate a Business 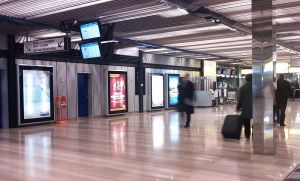 While the Academic Entrepreneur knows that a long argument about regressive vs. progressive taxation could occur here,
he was struck by the simplicity of what he termed the “10-10-10” policy. The marketer in him said “good positioning”.   For simplicity, he’s kept it to three 10’s, as a “10-10-10-10-10-10 policy” would be too long.  You see, Macedonia realized that it couldn’t afford to miss any the opportunity of getting its message across to every single international business traveler that happened to fly into its capital. The baggage area was a prime marketing space, as travelers had the time to stop, read and ponder as they waited for their luggage.

Macedonia became and independent nation-state upon the breakup of Yugoslavia and has a mere 2 million people. A poorer
country with nominal GDP per capita of about $10K (compared to $38K in the UK),  it has a zest for entrepreneurship, and a sense of hope.  The country wants to join the EU, but is continuously blocked by Greece, ironically, which is one country that is best off now actually leaving the EU because of its economic calamity and inability to devalue its currency as it is stuck with the Euro. It’s the name “Macedonia” and what area this represents that is the point of contention between Greece and the Republic of Macedonia.  Apparently this historical disagreement is strong enough to keep the Republic of Macedonia out of the EU.

Imagination Economy in The Land

Imagine Scotland with a “10-10-10 Policy”. Imagine visitors getting off the plane in Edinburgh, Aberdeen, or Glasgow, especially international business visitors, with a sign that greeted them as follows:

“Welcome to Scotland. The Land of 10s.
A Great Place for Entrepreneurs to Start or Relocate a Business

-0% corporate tax for the first 10 years in select entreprise trade zones
-10 days to legal incorporation and launch of a new business
-10% branch tax rate
-No tariffs, import or export duties

There is much to talk about of course in terms of public finances and the welfare state, and how the social safety net
will be maintained. However, for those of you who read The Academic Entrepreneur often, you will know from earlier posts
that he as talked about the importance of a liberal immigration policy that will both increase the population (from 5 to
10 million within 5 to 10 years after independence), and the number of startup ventures across all sectors. Whole new industries may be created. The possibility is quite probable of this occurring. Especially when a country and university system embraces the potential for the translation of knowledge and creativity into new imaginative economic outputs.  The combination of tax policy, immigration and innovation policy, and other programmes to increase the supply of venture capital will more than cover for the short term loss of tax revenue from lowered rates of taxation.

A Case for Independence in The Land

Such a liberal taxation policy as outlined above and followed by Macedonia would not be possible without the independence of Scotland.  Implementing such tax policy on a UK-wide platform would be virtually impossible to get through Westminster.  Ironically, the media has been painting a picture of business resistance to independence in recent weeks.

The Yes campaign has the enthusiastic support of people in small business (a significant chunk of SNP activists included) and a range of entrepreneurs besides.

Its not about what the current businesses have to say, — about what big oil companies such as Shell think Scotland
should do (stay in the UK vs. pursue independence, for instance). It’s not about what dinosaur banks which need bailed out with public funding because they are so grossly incompetent and feel above the Darwinist forces of the markets think about what
Scotland should do, and whether the country should remain part of the United Kingdom or not. RBS has “already squandered every penny” of its GBP 46 million public bailout funding, according to UK press.  Should the people of Scotland really be listening to what this dismal failure of a firm has to say about their wish to have a constitutional government and become a positive international partner?

No, it’s not about current big businesses, it’s all about the future business, the future entrepreneurs who will flock to The Land. What do they want? What do they need? What will attract them? And how is current London-driven, er, UK-driven tax, corporate, and immigration policy retarding the growth of innovation, new entrepreneurs and businesses? What would a set of better policies look like? Policies that could set the example for the rest of the world? This is all that matters. It will be the entrepreneurs who create the jobs of the future.

More innovative, technologically sound and strategic banks will replace the incumbents, of this we can be sure. Oil will
not dominate the world’s energy markets forever. New firms will create the brunt of the future employment in The Land,
and creatively destruct existing processes and firms. We can be sure of this.

Amazingly, creativity will prevail — it just needs a homeland. The artists, the creators, the aspiring chefs, the entrepreneurs, the geeks, the jugglers, the photographers and filmmakers of the world are searching for a place they can call home, and aspire to do great things,and, in the process, change that very world. They need a good deal to get there: a friendly immigration policy; a smooth and easy transition of relocating a business or starting a new one; and a tax policy that allows them to keep most of the wealth they create (and invest this wealth into other new ventures in the imagination economy).

Macedonia, a landlocked, impoverished yet aspiring state has an important message for Scotland:  The 10-10-10 Policy.  In fact, why not just put a sign up right in the arrivals area of each and every airport in Scotland?

Will The Land offer world’s best in terms of taxation, immigration and the ease of starting and relocating a business?

I leave you with the “Speech they Tried to Shout Down” delivered by MP Pete Wishart of Perth and North Perthshire last month.

This entry was posted on March 22, 2014, 23:34 and is filed under Corporate Tax, Edinburgh, Immigration Policy, Income Tax, Innovation Economy for an Independent Scotland, Innovation Policy, Scotland as a Spinout, Tax Policy. You can follow any responses to this entry through RSS 2.0. You can leave a response, or trackback from your own site.