The Edinburgh Hacklab, Hackerspaces as Edupunk, and the the Modern University

Flying Blimp-like object made by member of the Hacklab

Last Saturday evening I caught the end of the first birthday party for the Edinburgh Hackspace whose motto is “Making Stuff since 2010”.   The event was held adjacent to the Hacklab in the Out Of the Blue Drill Hall in Leith. Arriving late but just in time for the raffle, I donated a couple of items including the book “Free Radicals:  The Secret Anarchay of Science“ which I thought the crowd would be interested in (and it was), as well as an Adruino starter kit.  The raffle was quite generous as far as raffles go, with almost all of the participants winning something, from tool chests to copies of O’Reily’s Make magazine.  After popping champagne bottle party favors and enjoying the smell of gunpowder, our attention was turned to a member who deals in paraphernalia for the substance, non other than Andrew Simpson himself (affectionately nicknamed “Bart” by the ‘Labbers).  Not to be deterred by the rules against blasting off fireworks in the Out of the Blue Hall, the pyrotechnic found the loophole and instead enchanted us by bursting a series of balloons overhead, controlling the popping of miniexplosives by his own gear that was on display below.  After this climax to the evening I checked out some children’s computers that are a part of Project Sugarlab,  and was excused from some hurried “cleaning up”. I meet the ‘Labbers again when they headed to the pub accross the street.  There I was able to learn a bit more before reflecting the next day on meaning.

Apparently the group, now organized as an NGO which has the characterstics of a co-op for all intensive purposes, is now up to 20 members and bursting out of its current limited quarters in Leith.  They are searching for larger quarters currently.  The collective has had a number of successes in the past year, over and above the growing membership base:  They have secured a laser cutter, built 3D printers (which are attracting attention in the community), and made lots of stuff, including various flying things. In addition, they’ve educated others including the Valley Girl herself, who ended up getting a demonstration in robot maneuvering as well.  Most importantly, the collective has propogated the counter-culture of “make and learn” and usually in that order. 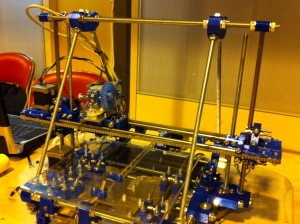 Contraption of sorts made at the Edinburgh Hacklab

It is on this note of education that I’d like to play out the next thought, and that is that hackerspaces are perhaps most valuable as organizations of Edupunk.  Recently I had a coffee with one of the members and he mentioned that students from the university were expressing interest in just coming along to the Hacklab to learn — to learn how to practically apply knowledge and make things from and of technology — to “get tacit” if you will — because they had found that the university was lacking in its ability, or willingness, to provide this as a part of their educational experinece.  Other Hackerspaces that I’ve read about offer a variety of workshops, seminars, and informal, impromtu educational sessions, which are led by members for the benefit of other members.

Edupunk is happening outside of the walls of institutions and is about alternative education: non-conformity, the questioning of authority, a do-it-yourself attitude, and some argue, anti-corporatism and anti-commercialism.  Edupunk can be seen as the application of the punk values of anti-authoritarianism, individualism, free thought, discontent, and rebellion to education. (But isn’t this what higher education should be all about anyway?)

Hackerspaces do not exist for the purpose of commercialising their inventions. In fact, their members are adamant that their organizations do not exist to make things in order to make money. Rather, they exist as spaces to invent, to make, to engage in collective activity, and, most importantly, to learn:

A hackerspace is “a place where people can learn about technology and science outside the confines
of work or school.” (emphasis added)  wrote Nick Farr in an oft-cited piece entitled “Respect the Past, Examine the Present, Build the Future” 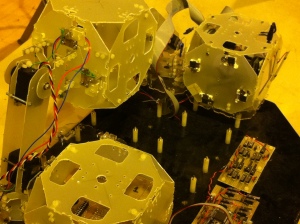 Yet another invention made at the Edinburgh Hacklab

They are grooming grounds for constructionist learning outside of the walls of formal education —  they are about about openness and sharing:  Open hardware, open software, and the sharing of resources and knowledge — and open 24 hours a day, 7 days a week, 365 days a year to their members.  They are also open to members of all shapes, sizes, and educational backgrounds.  Anyone interested in these themes and wants to learn or make something, on their own or with others, is weclome to join.  In our pub chat the other night, I learned that there were really no parameters or requirements for membership per se, besides “having two members vouch for you”  and until that time you can “hang out as a guest”.  (This reminded me of  like Sequioa Capital’s investment decision model as well where two partners have to agree on a venture capital investment, as a side note).  Some of the members that I met the other night were PhDs, or PhD students in the traditional educational institutional framework, others were more rebellious towards such institutional requirements and had dropped out at an earlier age, opting instead for DIY education and making stuff. Whatever the case, all found value in what the Hacklab had to offer, especially the collective nature of the organization and the learning it enabled.

Contrasting the edupunk of hackerspaces with the ingrained instutional education of the university is quite revealing. The university tends to be closed to membership –only “accepted” students, staff on the payroll, and, sometimes, alumni —  are welcome to participate in the university. The modern university, unlike its ancient relatives, is hierchial and top-down, with various rules and structures of authority. Little or nothing is actually “made” at the university, outside of ideas and theories, and the communication of these.  Its terms and rules are rigid in comparison.  Open 24/7, 365 days a year is not a policy of the modern university.

Unfortunately, the university has become more “closed” in sharing its knowledge and  inventions, especially since changes in intellectual property laws and ownership rights (such as the Bay Dohyle Act in the USA)  — it has become more concerned with keeping its findings and inventions secret than sharing them. Professors who are on the road to invention, in fact, are encouraged to “patent first” and then “publish”.  Despite the fact that most universities do not make money from their technology transfer offices, they continue to take a “closed” approach.  Ironially, this has raised the ire of some corporations, who are now requiring universities to open source the results in order to receive the research funding that they offer.

Revelers celebrate edupunk at the birthday party for the Edinburgh Hacklab

The growth of hackerspaces has been rapid since the first were found in the 1990’s. The growth of these organizations has been correlated with various societal, economic, and technological forces, including the open source hardware movement, and they are now found all over the world.  DIY enthusiasts are flocking to them, along with others, as mentioned above, that want to learn. Curently there are at least 100 hackerspaces worldwide, but there are most likely many that have yet to be documented.

Two edupunk celebratees look on from behind the blimp

Some universities have explored aligning or starting their own hackerspaces.  However, I expect that most universities will find an excuse not to embrace them for some of the reasons cited above.  Recently I had a conversation with a Head of School and another Chair from a local university about the Hackerspace concept. Having never heard of it, they were quite intrigued and both remarked “Isn’t this what a university should be doing”?  One of them went so far as to be saying “If this isn’t what a university should be doing, then what does it do?”  While I was amused by their idealism, the practicality is that the modern university wouldn’t know where and how to place such an edupunk collective within its walls — and the members themselves would surely find reason to rebel before long as some authoritarian structure was put in place to “babysit” the effort, the department next door complained about the laser cutter, or the university took away 24/7, 365  access, or imposed beauractric controls including admission requirements.

Over the longer term, just as universities were (and still are) valuable to cities and regions for the teaching and research they engage in, so too are Hackerspaces (also referred to as Makespaces and Creativespaces) for the tacit learning and inventions that they produce.  While the hackerspace business model is still evolving, it seems to me that cities, councils, and regional governments, in addition to NGOs and charitable trusts, should have a keen interest in assisting hackerspaces in their communities through providing resources such as space and funding so that these organizations can thrive and grow.  Some of the outuputs of hacklabs will surely be of benefit to the community, such as the development of computers or software in the education of children, as we can see below.

computers for children, part of Project Sugarlabs, on display at the Edinbugh Hacklab Birthday Party in Leith

Finally, hackerspaces and makespaces have the potential to create new ventures themselves, as there could be “mutant” technologies, inventions or projects that have market potential and leave the hackerspace.  These new for-profit ventures of course will be spunout of the collective by a new class of “Edupunk Entrepreneurs“, a special breed of Academic Entrepreneurs.

This entry was posted on September 26, 2011, 14:55 and is filed under Uncategorized. You can follow any responses to this entry through RSS 2.0. You can leave a response, or trackback from your own site.